Future sight considered to be the closest legal set to a un-set was the last part of a set focus on past, present, and future. Future-sight represented the future of mtg and with it came abilities we would see and haven't seen since it's creations. Some of the future sight most iconic cards are modern favorite tarmogoyf which was the first card to mention the card type planeswalker. A favorite which we finally got to recently see was riggers and contraptions first mentioned in the set. The set also gave us the popular land cycle recently seen in iconic masters again. The set was designed by mark rosewater and I have to say he's done a great job on showing us the future of mtg. To go with the theme of the future we saw a new card border called “future-shifted.” These cards were supposed to be cards we would see down the line as time went on. Things like logic knot and tarmogoyf had the time-shifted borders. The set had the largest amount of new and returning keywords and cycles

Calling future sight a glimpse into the future of magic is an understatement. The future sight was 180 card sized glimpses into all different possible times that may not even happen at all. And even that just feels like the tip of the iceberg.

New magic is synonymous with keywords, so Future Sight was host to no fewer than THIRTY-SIX of them, in every available flavor and combination from past, present or fantasyland of a future. I mean really, when was the last time you cast a card with Fortify? Or Gravestorm, or Absorb? Does anyone know what Transfigure does? Yet Future Sight brought all this to the table and simply dared you to keep up!

Like its sister sets in Time Spiral block, the set spent plenty of time reimagining and referencing older sets with those mechanics too. For the first time, flashback met cycling. Cycling met madness. Madness met hellbent, convoke met kicker, buyback meet storm, and they generally became fast friends. Except for the fact-finding places to reprint them is sometimes ridiculous as both keywords have to be available in the same set.

But for a set trying to leave its mark on history, this is some weak stuff. Zany futures, some niche ideas pieced together from the past- what did thirty-six keywords ever do to impact magic's present? More than players, old or young, usually realize.

Gaining life from a creature's damage. A complete resistance to being targeted. The sure, venomous creature kill of a cobra or basilisk. The ability to block flyers from the ground. Today, these are common, recognizable abilities, and as a matter of fact, they were before Future Sight too, but our set had the honor of naming and popularizing them. Some of these abilities were as old as Magic itself, but surprisingly enough, it took Future Sight to get Lifelink, Deathtouch, Reach, and Shroud into the evergreen book and player's vocabularies.

This may have been one of the set's greatest legacies, but we can't overlook the oddball predictions that wound up coming true either. We've got the forerunners of entire sets worth of cards here, including the famous saga that is the contraption, and the first enchantment creature, instances of delve, colored artifact, and devoid spell! That latter two also includes the first references to story threads like New Phyrexia and Ugin years in advance.

The set introduced tons of new abilities such as..

This was reserve scrying used to put your opponent most popularly used as the +2 on Jace the mind sculptor though it wasn't officially called fateseal on him.

There's this ability called storm it's considered pretty powerful. Well more than that there's also Gravestorm. Where you storm count is equal to the number of cards to go to the grave.

The set also included many cycles

It showed descends of iconic creatures of mtgs past as the future generation. An example was Baru, Fist of Krosa being the descendent Kamala, Fist of Krosa. 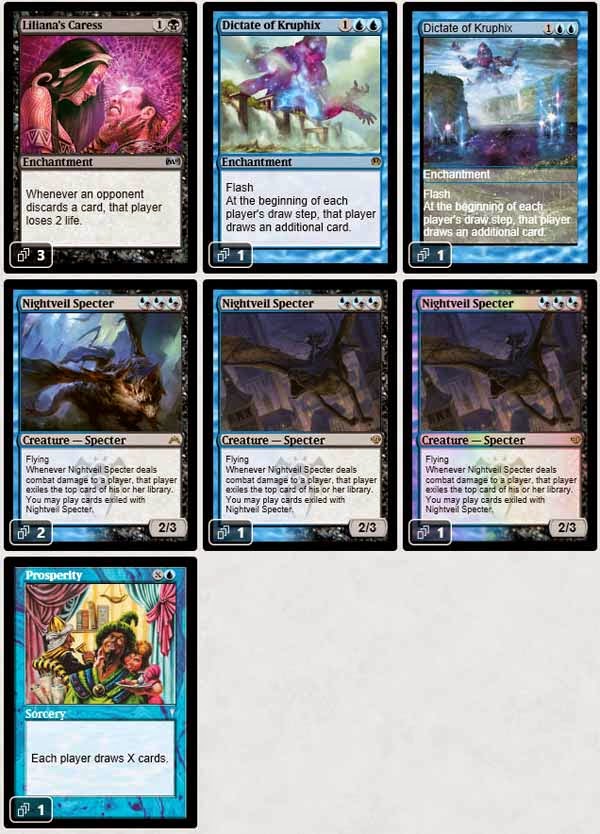 The duel future lands that we recently saw in Iconic masters was also another popular land cycle to come from this set.

Pact of negation and more was first printed in this set. Most of them are considered very strong in modern and other formats.

Slivers had a cycle of slivers that we're future shifted. Each if these slivers came with a new keyword.

The future sight had a lot to offer and it delivered but come on wizards I want to see the rest of that land cycle. Stop playing with us and give it to us. #CCMain3