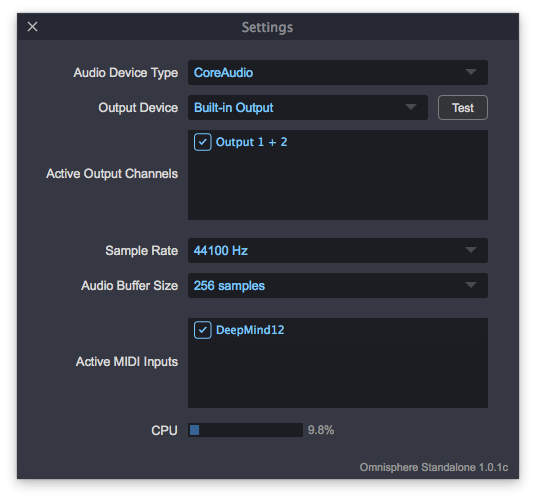 The innovative new feature bridges the physical experience gap between software and hardware, allowing users intuitive control and the ability to easily create/modify Omnisphere sounds by using the familiar layout of their supported hardware synth with minimal setup. The initial release will officially support over 20 popular hardware synthesizers from Moog®, Dave Smith Instruments®, Roland®, Korg®, Behringer®, Novation®, Sequential® and more to come. The supported hardware synths cover a wide range of types and price ranges for different types of users.

On the technical side, the new Hardware Synth Integration feature in v2.5 goes far beyond the typical “MIDI Learn” approaches that most software synthesizers employ. Under the hood, Spectrasonics development team has carefully designed unique “Hardware Profiles” for each supported hardware synthesizer, to make the special features of that hardware work seamlessly with Omnisphere by translating MIDI messages from the hardware into satisfying sonic results in Omnisphere. This new system allows Spectrasonics to enable sophisticated interactions from a single touch of a knob, including the ability for Omnisphere to automatically recall entire FX racks, assign multiple scaled parameters and even instantly create complex modulation matrix routings on-the-fly. The new development system also allows Spectrasonics to add new profiles for new hardware synths in the future. Most importantly, it’s easy for musicians to use - simply by selecting the hardware synth from the drop-down HW menu!

The new version 2.5 vastly expands the synthesis capabilities of Omnisphere by doubling Omnisphere’s voice architecture to Four Layers per patch! Each patch can now utilize up to 12 envelopes, 8 LFOs and the Modulation Matrix has been doubled to 48 modulation routings. Newly designed State Variable Filters are included, which were specially created for the OB-6 hardware profile and can seamlessly blend between lowpass, notch and hipass filter modes. Over 50 New “Analog” Oscillator Wavetables are included and featured in the new hardware profiles.

Omnisphere 2.5 includes a new “Hardware Library” with hundreds of new patches created by Eric Persing and the renowned Spectrasonics Sound Development team using the Hardware Synth Integration feature. Each hardware profile has a corresponding set of sounds in the Hardware Library which were specially designed using that hardware synth as an Omnisphere controller. The new sounds feature a wide range of categories and many have a distinctly ‘classic analog’ flavor! Best of all, the new sounds are available for ALL users, regardless of if they use hardware or not!

“Since the beginning of computer-based music, the biggest limitation of software synthesizers has been the lack of physical interaction. It’s hard to beat the immediacy of a physical synthesizer that you can touch! We are very excited to be able to finally eliminate that problem by utilizing the world’s finest hardware synthesizers to fully control Omnisphere.” said Eric Persing, Creative Director of Spectrasonics. “We’ve never felt that the worlds of software and hardware synths should be segregated into different ‘camps’. Our virtual instrument users can now experience the joy of the hardware synth workflow and hardware synth users can now fully expand their capabilities into the vast sonic world of Omnisphere!”

*complete list of new features and supported synths will be announced upon the official release in mid-Summer 2018.

Omnisphere 2.5 is a FREE update to all registered Omnisphere 2 users!
Public Beta starts in May
Official Release Mid-Summer