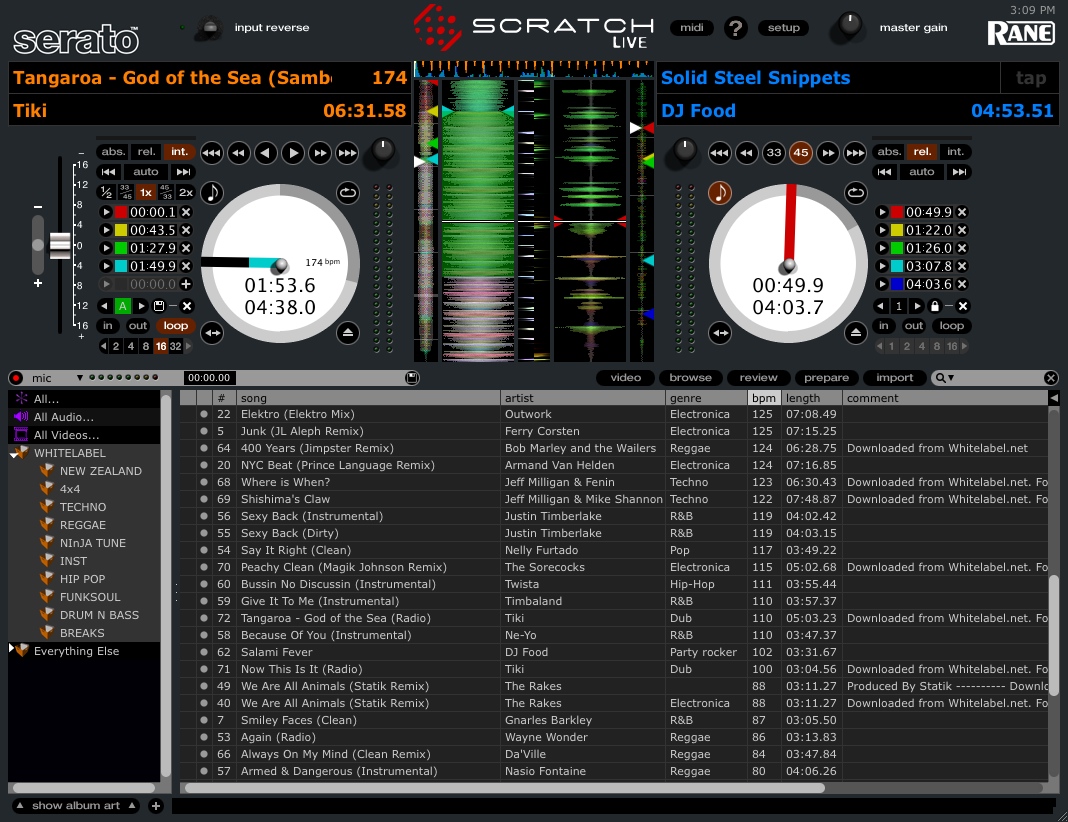 Scratch Live is a vinyl emulation software application created by New Zealand based Serato Audio Research, distributed by and licensed exclusively to Rane Corporation. Serato was first known for its Pro Tools plug-in, Pitch N Time, which was sold predominantly to the film industry.[1]

The product is discontinued and has been replaced by Serato DJ.

There are lots of packs to choose from across different genres including deep house, dub, EDM, latin, drum ’n bass, trance, and even Melbourne Bounce.It would be awesome if you could load your own sounds to Looper, but at the moment you can’t. Part of the reason why Looper sounds good and is because it comes with loops and samples pre-loaded from Loopmasters, and if you’re a djay Pro subscriber you get access to even more packs available from the djay Store for free. /djay-pro-on-laptop-windows.html. Perhaps in a future update? The controls in Video mode have a new, more intuitive layout, plus the lower half of the screen now has the Looper interface which itself has video windows per column. Video mixingThe ability to mix video in djay Pro continues to improve.

In 2008, Serato released the first major plugin for Scratch Live, Video-SL. It allows the playback of video files in similar fashion to audio files. Users can apply effects in real time and mix between video independently of audio.

A demo copy can be installed and used but a watermark is displayed on the main output screen. Activation is done via a serial number.

The latest audio interface is the SL4. It is the first standalone DJ interface with two USB 2.0 ports for seamless DJ changeover and back-to-back performances. It also has 96 kHz, 24-bit audio. The SL4 has built in galvanic isolation between USB and audio, with turn on/off muting. The unit also includes Low-latency ASIO and Core Audio drivers which allow the SL4 to be used as a studio production tool with third-party software applications.

The SL3 is another audio interface for Scratch Live. Features include a USB 2.0 interface, improved dynamic range (120 dB), improved audio performance (24 bit converters) and additional audio channels with AUX input and output. Like the SL2 it also has 48.0 kHz, 24-bit audio. The extra channel allows the DJ to record his/her music set, use a sampler while performing or connect a third player for three deck mixing.

The SL2 is the audio interface set to replace the older SL1 interface.[2] The unit has 2 inputs which can be used both as phono or line input, but unlike the old SL1 interface it doesn't have a microphone input and it has only 2 line outputs and no 'thru' outputs. It also features improvements to the sound quality. Whereas the SL1 interface had 16-bit 44.1 kHz audio, the SL2 now has 24-bit 48khZ audio with USB2.0 and Core Audio/ASIO support.[3]

The SL1 is a multi-channel, USB 1.1 external soundcard. The unit has inputs for two stereo turntables or CD players and one unbalanced microphone. There are two stereo line level outputs and two 'thru' outputs which provide a copy of the input signal to enable playback of regular vinyl records or CDs. ASIO drivers are available for the unit to allow it to be used by other Windows applications as a multi channel sound interface. There are no Core Audio drivers for Macintosh-based computers. The SL1 interface is no longer in production, but is still supported.[4]

A 19' rack mount DJ mixer based on the MP2, incorporating the sound card functions of the SL1. The MP4 allows you to record your set digitally within the Scratch Live software over the USB interface. The mixer is recognized by Windows as a 4x output 2x input soundcard so it can be used with any windows application. Also provided are ASIO and Core Audio drivers for use in audio applications on both Windows XP and Mac OS X.

A DJ mixer combining the functionality of the SL1 with an application specific control surface based on the popular TTM56 scratch mixer. It also contains added effects not available with the TTM56 or bare SL1 set-ups.

Announced at NAMM 2010, the Sixty-Eight is a 4 channel club style mixer with 2 separate USB inputs. Via ScratchLive 2.0 it adds support for up 4 real or virtual deck combinations.

Serato have begun working in supporting third party players/controllers with the Scratch Live software. These controllers are 'natively' supported and do not require the use of the timecode CDs, all playback and control information is sent over USB. The following are the currently supported native controllers: